In order to use GPS, you'll need to set up multiple GPS hosts. These are computers running the special gps host program, which tell other computers the host's position. Several hosts running together are known as a GPS constellation.

In order to give the best results, a GPS constellation needs at least four computers. More than four GPS hosts per constellation is redundant, but it does not cause problems. 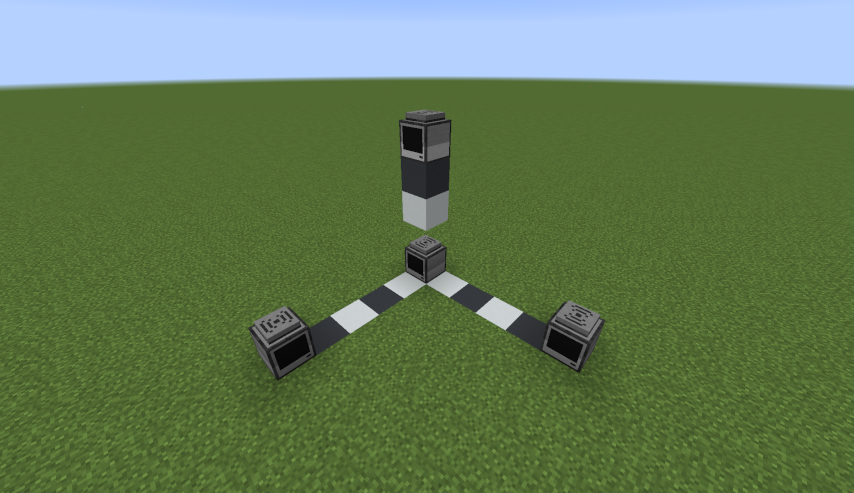 We are going to build our GPS constellation as shown in the image above. You will need 4 computers and either 4 wireless modems or 4 ender modems. Try not to mix ender and wireless modems together as you might get some odd behavior when your requesting computers are out of range.

Ender modems have a very large range, which makes them very useful for setting up GPS hosts. If you do this then you will likely only need one GPS constellation for the whole dimension (such as the Overworld or Nether).

If you do use wireless modems then you may find that you need multiple GPS constellations to cover your needs.

A computer needs a wireless or ender modem and to be in range of a GPS constellation that is in the same dimension as it to use the GPS API. The reason for this is that ComputerCraft mimics real-life GPS by making use of the distance parameter of modem messages and some maths.

Locate where you want to place your GPS constellation. You will need an area at least 6 blocks high, 6 blocks wide, and 6 blocks deep (6x6x6). If you are using wireless modems then you may want to build your constellation as high as you can because high altitude boosts modem message range and thus the radius that your constellation covers.

The GPS constellation will only work when it is in a loaded chunk. If you want your constellation to always be accessible, you may want to permanently load the chunk using a vanilla or modded chunk loader. Make sure that your 6x6x6 area fits in a single chunk to reduce the number of chunks that need to be kept loaded.

With all four computers placed within the 6x6x6, place one modem on top of each computer. You should have 4 modems and 4 computers all within your 6x6x6 where each modem is attached to a computer and each computer has a modem.

Currently your GPS constellation will not work, that's because each host is not aware that it's a GPS host. We will fix this in the next section.

Now that the structure of your constellation is built, we need to configure each host in it.

Go back to the first computer that you placed and create a startup file, by running edit startup.

Type the following code into the file:

Escape from the computer GUI and then press F3 to open Minecraft's debug screen and then look at the computer (without opening the GUI). On the right of the screen about halfway down you should see an entry labeled Targeted Block, the numbers correspond to the position of the block that you are looking at. Replace x with the first number, y with the second number, and z with the third number.

Create similar startup files for the other computers in your constellation, making sure to input the each computer's own coordinates.

⚠ Modem messages come from the computer's position, not the modem's

Congratulations, your constellation is now fully set up! You can test it by placing another computer close by, placing a wireless modem on it, and running the gps locate program (or calling the gps.locate function).

🛈 Why use Minecraft's coordinates?